Acrylic Painting has quickly become one of the most popular and versatile art mediums.  Perfect for beginners or experienced artists, our acrylic classes will help develop your creativity and techniques. 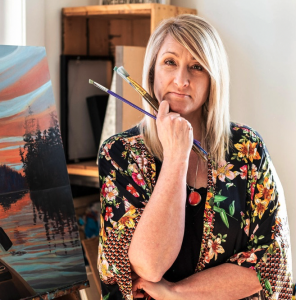 My name is Dawn Schmidt and I grew up in Southern Manitoba, Canada. From an early age I was drawn to the arts, always creating, drawing, playing piano, writing music and performing as a jazz vocalist.  I was also influenced early on by my grandmother who was a landscape painter.

As life happened it wasn’t until later while raising my four young children that I realized I needed an outlet for my lost creativity, so I began expressing myself through painting.

I started taking courses and became part of a local Steinbach Arts Council which allowed me to mature as an artist. I am deeply inspired by the beauty of nature and the vivid colours of our seasons.

I’ve had the honour of painting live on stage with the Winnipeg Symphony Orchestra.  I have also had several local organizations commission me to paint pieces for them and my art hangs in homes across Canada and the United States. Currently my work is being represented by the Pulse Gallery at the Forks in Winnipeg.

Want to learn the art of Acrylic Painting?  Join us for a journey of creativity and learning with our skilled instructor Dawn Schmidt as we paint with acrylics together.  Make beautiful masterpieces while learning proper painting techniques!

A SAC Membership must be purchased for all classes which consist of multiple sessions (1+ hours per session). For workshops under 8 hours long or 1-day duration only, a member and non-member price will be indicated. Memberships have a 1-year validity and are non-refundable.

To learn more about the benefits of having a SAC Membership, click here.

Full refunds are given when you withdraw two weeks prior to the start date of a class/workshop/day camp. From that point until the start of classes, a 50% credit will be applied to your account upon withdrawal. There will be no refund after the start date. Your class fees help our Centre operate and offer high-quality programming for you and the community, and we strive to make it affordable for all. By signing up for a class/program, you are acknowledging our refund policy.

Only the Class Fee is subject to a refund. Your SAC membership, admin fees, and material fees are not included in the refund amount. We can send your refund in person back to your original mode of payment or by cheque in the mail.

Classes/Workshops are subject to cancellation if the minimum number of registrants is not reached.  In this case, a full refund (or an account credit) will be issued including membership and administration fees. We inform registering students as soon as possible when we have cancelled a class.

If Due to Public Health Recommendations

If Public Health recommends that isolation is to be reinstated and arrangements for virtual teaching can be made by SAC, no credits or refunds will be issued.

If virtual learning is not possible, the participant will receive a prorated credit for the remainder of their class.

Students will receive an information/reminder email prior to the start of a class/workshop.

For general inquiries about cancellations, withdrawals, and refund requests, please bring it to our attention at: info@steinbacharts.ca

SAC aims to break barriers and give every child the opportunity to participate in our programs. To apply for a bursary, please request a form from our office: office@steinbacharts.ca